Facts About Squirrels and Your Chimney A chimney is an inviting place for squirrels, small birds, and other critters, looking to build a cozy nest away from the reach of predators. Most homeowners don’t realize that the neighborhood critters are using the chimney as a hotel until they hear the pattering, squealing, and gnawing of critters in the night. The chimney is not a safe place for squirrels. Once squirrels and other small animals check-in, they often become trapped and perish. In the meantime, they can make a mess and damage the brickwork.

How Squirrels and Their Friends Get Inside

Squirrels, raccoons, mice, and other rodents are small, agile, and very fast. Their sharp teeth and claws not only help them defend against predators and hunt for food, but also make it easy for them to climb up just about anything like trees, utility poles, and even chimneys. For a squirrel, climbing up a brick chimney is like walking up a flight of stairs. When they arrive at the top, they crawl in the chimney through the exposed flue.

Getting Rid of Squirrels in the Chimney

If you suspect that you have squirrels squatting in your chimney, do not use your fireplace. They should be removed as humanely as possible. Extreme care should be taken. They may be frightened and could scratch or bite when provoked. They can also be a carrier for diseases. One method recommended by the Humane Society of the United States is to tie a rope from the top of the chimney and extend it down to the damper. Unless the squirrel is injured or trapped, it may climb up the line and exit the same way it came in. It is strongly advised that you contact a qualified chimney professional or pest control to humanely remove squirrels and other small animals that are nesting in your chimney.

Keeping Squirrels and Pests Out of the Chimney 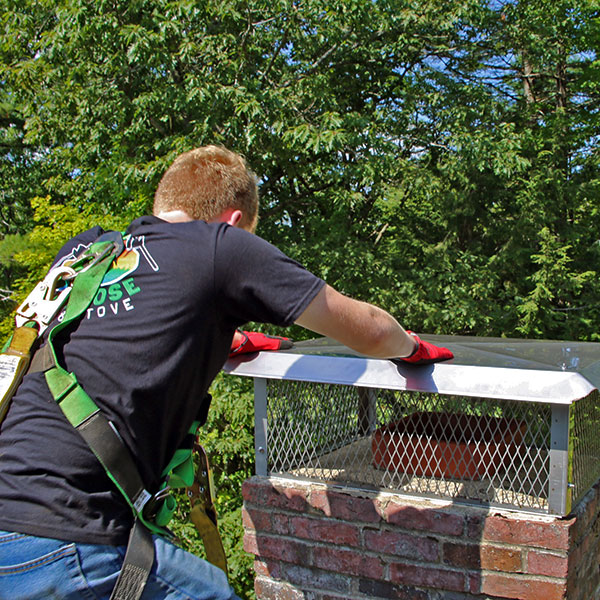 Installing a chimney cap is the best way to prevent uninvited guests from climbing into the flue. They are available in a variety of aesthetic-pleasing styles and sizes to fit any chimney. They also have a wire mesh screen that keeps critters out while venting smoke and fumes from the fireplace. A spark arrestor feature prevents hot embers from flying out of the flue and potentially igniting the roof. It will also prevent moisture from getting in the flue and minimizes backdrafts. The chimney cap should be checked at least annually, preferably during a professional chimney inspection.

The Chimney Safety Institute of America (CSIA) recommends homeowners have annual chimney inspections. A basic level I inspection includes checking the flue for signs of animal nesting. The chimney sweep will also recommend cleaning and repairing any damages these critters may cause. A damaged or missing cap should be fixed or replaced as soon as possible to prevent chimney damage.